Templar, Priory of Denmark was formally established by decision in Grand Priory of Skandinavia on 27 april 1996, and then began the work of building priory. Centrally located in this work was Grand Prior General Gert Grotte, which for many years had had a connection to Danish reservofficers association and, on the other hand, the then Swedish defence attaché in Copenhagen, Colonel of 1. degree Kaj Nielsen, with close links to the Danish defence senior management and General officers ' circles in the Danish armed forces.

Meeting activities led to the 10th November 1998 established an interim Convention led by Grand Prior general with the task to plan and carry out the first-order chapter with the inclusion of new Knights and annual meeting Ridderdag in Priory Denmark.

Welcome to the Priory of Denmark 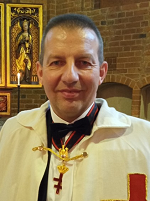 Priorat Denmark is part of Grand priory of Scandinavia covering the Nordic countries and today has over 500 knights. After restarting the Priorat Denmark will Priory to consolidate and then build a new well-functioning Priory.

Today the Priory of nine knights and our Order has a military dimension is the Knights professional or reserve officers.

The outreach activities mainly consist of humanitarian aid which we are engaged through Storprioratets Humanitarian Fund. This fund supports in recent years orphanages, rehabilitation centers and help for street children in the Baltic countries.