During the first 25 years the Knights Templar forces concentrated on building and consolidating the "internal" operations. Meanwhile, we have through concrete efforts have tried us out how we can best and most cost-effective way to help more needy, outside the Empire's borders.

We note that we are now ready to step up our efforts to keep our charitable efforts (the Order's most important task). By återinstifta the Knights of the Order Bene Factors we will be able to increase the impact of our service. In all respects, and no matter how much support we receive from so will the Knights Templar ensure that all contributions made ​​to the Humanitarian Fund in full go to charity actions end receivers.

Our Bene Factors presented (briefly) on this page. 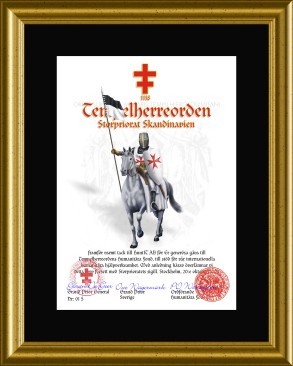 Benefaktorerna was considered, along with the Knights, to be the most important actors in and around Tempelherreorden.Orden were both freed from "Tenth" and had the right to charge the same. They built up including own food, remontstationer, yards, workshops, and forges all of which were generic name preceptorier.

Order established the first global banking and credit system. All this contributed to the Order's financial success, but it was - even at that time - very expensive to wage war without the Bene Factors that would mandate of Outremer (beyond the sea = Crusader states) have not been completed.

An example: Safed, which had been built in the 1240's to the enormous costs, was now the largest castle in the kingdom of Jerusalem, and by the command of the Templars Galilee and the road between Damascus and Acre. In peacetime it had a garrison of 1,700 man was expanded with 500 men in wartime. Of these, 50 Templars, 30 servienter, 50 turkopoler and 300 crossbowmen. Building costs will have amounted to 1,100,000 Saracen besanter, and walls champions had the help of 400 slaves during construction. In order to maintain the guarantee food supplies needed 12,000 klövjelaster grain a year, some of which were imported from the Knights of the Order preceptorier around Europe.