25, 2015, the founding meeting for Commandery Nidaros was held in Drammen after the Great Priory Skcandinavia had completed its Word title. The founding meeting for Priory Norway's first Commanderi was conducted with Grand Prior General Storprioriat Skcandinavia and Grand Prior for Prioriat Norway present. RThO Lasse Hegge was chosen as Commander's first Commander.
During the year 2014 and 2015, preparations for the establishment of a Kommanderi in Nidaros were completed and a preparatory meeting for foundation was conducted in Trondheim on 18 April 2015.

Commanderys Weapons were approved by the Grand Prior General in Oslo on 17 October 2015. The weapon consists of two Olav axes in gold on a black wall. On silver a red temple reed in dexter and in sinister St. Olav in red. 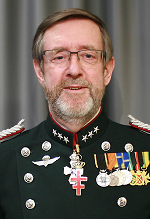 is affiliated with Prioriat Norway, which in turn is under the Grand Priory of Scandinavia. Command command is an organizational part of O.S.M.T.H. (Ordo Supremus Militaris Templi Hieroisolmymitani). Baillivat has its scope in Central Norway in Trøndelag and Møre, and includes b (the Dioceses of Nidaros and Diocese of Møre.)

The command is led by a Commander with the support of a Convention (board) who holds regular board meetings and a Røding (annual meeting).

The baillivat´s headquarters are Trondheim in Trøndelag county.