July 5, 2017, an inaugural meeting was held with the intention of forming a Commandery in the South. A request was made to Priorat Sweden's Convention. On February 17, 2018, the working group held an interim convention in Lund. Where Knights transferred from Denmark was presented.

During the year 2018, information on t.f. The Commandery's planning work is sent to all the Knights concerned and that we have adopted the working name Kommanderi St. Peter is based in Lund and that we will have Klosterkyrkan as a gathering place.

On November 17, the Urtima Knights Day was held when the final decision on statute change and the possibility of introducing Commanderies and Ballivat in Priorat Sweden. In the afternoon, the Order of the Temple Lord's Priorate Sweden Order of the Order was instituted with the establishment of Commandery.

On December 8, the year ended with a Lagtima Riddarting in the Abbey church in solemn forms. Where the banner for the first time was not brought to a Korum, Thus Commandery Saint Peter is established. 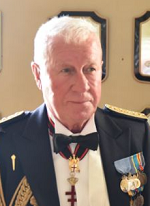 Commandery Saint Peter is under Priorat Sweden which in turn falls under the Grand Priority Scandinavia. Saint Peter operates in southern Sweden with the catchment area of ​​southern Halland, southern Småland, Blekinge and Skåne. Within the area there are about 40 Knights who do good and right!

Commandery Sankt Peter is led by a convention that conducts regular board meetings and the annual Lagtima Riddarting (annual meeting). Commandery St. Peter's seat is Lund with the Abbey church as the base for our Order. Saint Peter's Monastery Church has links to the Temple Knights when Abbot Sankt Bernhard of Clairvaux wrote the Knights Temple Lord's Regula (statutes) and had strong ties to the Order.